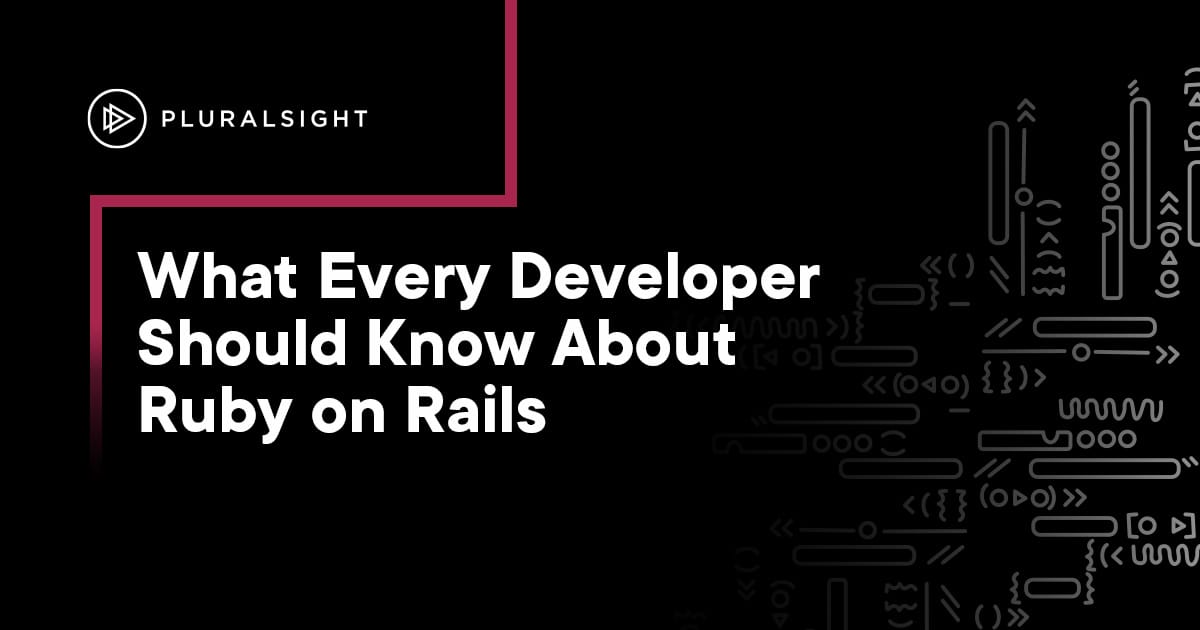 What Every Developer Should Know About Ruby on Rails

Chances are that even if you've just barely dipped your toes into the waters of application development, you've heard of Ruby on Rails. Looking to learn more about the framework? You’ve come to the right place.

Part one of a four-part series about Ruby on Rails.

Chances are that even if you’ve just barely dipped your toes into the waters of application development, you’ve heard of Ruby on Rails. With over 3.9 million websites built on Ruby on Rails, the web development framework is one of the top choices for creating applications across the globe. Developers have flocked to Ruby on Rails over the years for its ease of use, flexibility, simple maintenance and speed.

Looking to learn more about the framework? You’ve come to the right place. In this article, we’ll discuss the origin of Ruby on Rails, the reasons for its long standing popularity, and its place in the market.

Origin of Ruby on Rails

Ruby on Rails was officially released as open-source code in 2004. The web development framework was created by David Heinemeier Hansson in 2003 while he was working on Basecamp and its codebase. The magic of the evolution of Ruby into Ruby on Rails is the framework’s ability to leverage object oriented programming to increase code reuse and accelerate the speed of development particularly in areas such as table creation, migration and scaffolding of views.

Why Use Ruby on Rails

Ruby on Rails became popular for creating user-friendly web applications quickly and easily. A number of well-known brands have used Ruby on Rails to build their sites, including Hulu, Shopify, Airbnb, Instacart and Etsy. The framework is most often selected to build high-performance web applications and websites. Some common uses include ecommerce sites, social networks, software as a service (SaaS), portals, content management systems (CMS) and stock exchange platforms.

So, what advantages does Ruby on Rails offer developers when building website applications? There are many benefits, but here are four of the top reasons to use the framework on your next development project.

Flexibility is the foundation of many of the benefits you’ll find with Ruby on Rails. The rails framework is particularly adaptable, which has made it a top choice for start-ups and organizations of all sizes since its initial release. You can add in and remove modules as needed, as well as modify or expand parts of the application throughout the development process. The level of flexibility gives developers the ability to pick and choose the right elements to drive the best results from their projects.

Ruby uses a lean code-base and fewer lines of code overall, which accelerates the development process. Developers appreciate its simple logic, object orientation and modular design because they enhance rapid development. There is no need to build infrastructure, configure files for setup or select defaults. All of these elements are ready to be used.

Developers can also use modules in third-party libraries and integrate them into the final product. These components further accelerate the development process. You can also leverage integrated testing right into the coding process instead of relying on external tools.

As open-source code, Ruby on Rails has no licensing costs, which makes it appealing to businesses. However, it’s beneficial for developers too. Developers can save time and money on projects, allowing them to complete work more quickly.

Ruby on Rails is known for being easy to maintain. Its framework has matured over the years, making it easier to support than a newcomer to the market. Ruby code favors convention over configuration, which is preferred by most developers. The clean code and default to conventions make for easier troubleshooting and fewer bugs in the long run. For long-term projects, convention over configuration is also helpful. Developers can update the application, refactor the code and add new features with ease.

The code behind the Ruby on Rails framework is self-documenting. Developers can jump into the actual development of a project instead of spending time writing lots of documentation. The majority of web applications are written in Rails, so developers have access to lots of integrations from the start.

The open-source community is one of the biggest advantages of using Ruby on Rails. You can access pre-made solutions that have already been built and tested by others. Within the community, you’ll find tips, advice, new project announcements and lots of solutions for common (and even uncommon) hurdles.

Developers in particular enjoy RubyGems. These software packages contain Ruby applications and libraries, which you can use to extend or modify functionality in your Ruby applications. This level of knowledge and support helps developers build better solutions. For businesses, it makes it easier to bring more developers onto a project and get up to speed fast.

Why Should You Learn Ruby?

The 2020 Stack Overflow Developer Survey names Ruby as the 14th most popular programming language in the world with 7.1% of respondents being Ruby on Rails developers. Hundreds of thousands of websites use Ruby for a reason. It’s an excellent choice for building high-performance applications quickly. New features can be implemented via RubyGems, bugs are uncommon, and there’s always someone to provide support in the Ruby community.

Plus, it’s easy to learn and understand Ruby code. You can develop your first real application in a couple of hours and build web applications, services— even automated deployment tools. For more insights on what makes Ruby a first class language for the cloud, check out this recent video featuring Pluralsight Senior Developer Evangelist, Jeremy Morgan.

In the next installment in our series, we’ll look at the most critical roles for Ruby on Rails developers and common career paths. In the meantime, get started learning the fundamentals of Ruby on Rails.