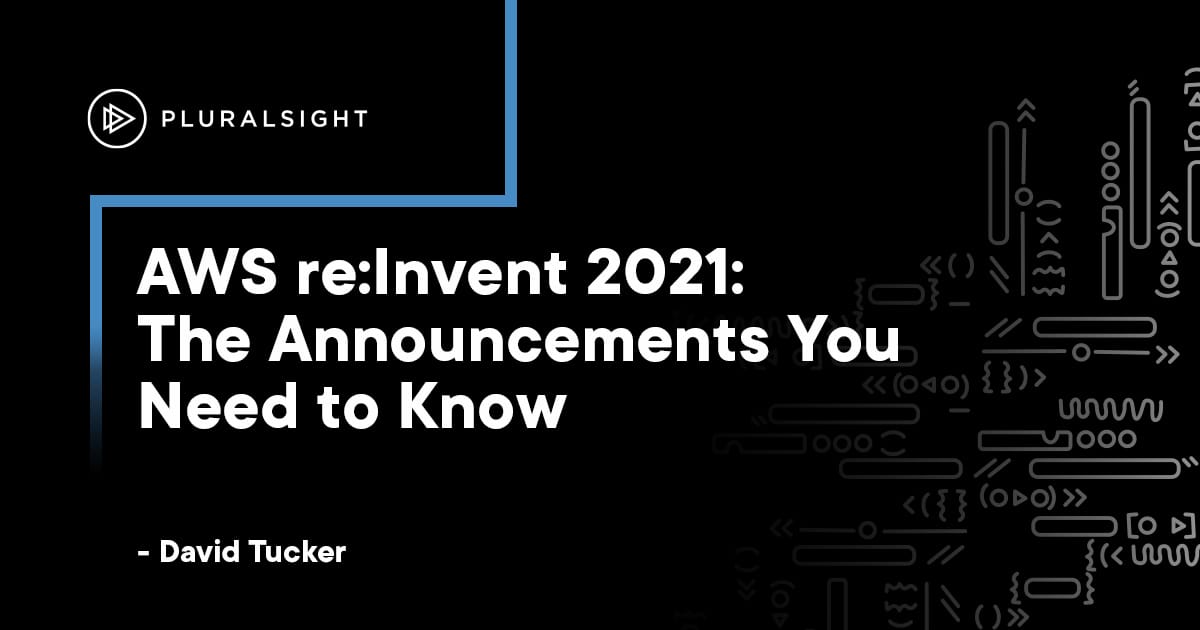 AWS re:Invent 2021: The announcements you need to know

It was an action-packed time in Las Vegas last week for AWS re:Invent 2021. The AWS community gathered in person (and virtually) for a handful of keynotes, hundreds of sessions, and a bit of partying. The week had all the energy you would …

It was an action-packed time in Las Vegas last week for AWS re:Invent 2021. The AWS community gathered in person (and virtually) for a handful of keynotes, hundreds of sessions, and a bit of partying. The week had all the energy you would expect from re:invent, which hasn’t been held in person since December 2019.

If you missed the event or are looking for a recap of the highlights from the flood of announcements, here’s our rundown of the most exciting news from AWS re:Invent 2021.

Data was a key focus of the announcements at re:Invent 2021. And one key theme we saw pop up over and over again was AWS making it even easier to process large amounts of data while reducing the work you have to do to maintain the infrastructure.

The big announcement in this category was that there are now serverless and on-demand versions of several critical services around data analytics.

We now have serverless versions of Elastic Map Reduce (or EMR) , Redshift, and Managed Streaming for Kafka (or MSK) .

In addition to these serverless options, we now have an on-demand version of Kinesis Data Streams .

Since this is on demand you don’t quite get all the benefits of serverless as you’ll have to pay a base cost whether you use it or not. However, you no longer have to worry about managing the infrastructure.

The three serverless offerings are all in public preview, but the on-demand option for Kinesis Data Streams is generally available.

Another big announcement in this space is one that affects DynamoDB users: there’s now an infrequent access table class , resulting in up to 60% savings over the standard table class.

One of the great things about this is that you don’t have to migrate your data to a new table to take advantage of this. You can seamlessly switch the table class at any point.

Amazon is making it possible to bring even more SQL Server workloads into the cloud with Amazon RDS Custom for SQL Server . So if you have specific requirements for your SQL Server applications that weren’t possible in RDS previously, you should check this out. It can now accommodate a lot of new use cases.

Finally, we have a new archive storage class in Amazon S3 Glacier Instant Retrieval , which provides access in milliseconds to your archived objects. The best part of this is that it integrates with Intelligent Tiering to make it seamless to transition your objects to the correct storage class. Head over to the A Cloud Guru blog for a more detailed hands-on look at S3 Glacier Instant Retrieval and which S3 Storage Class is right for you .

There was no shortage of machine learning news out of re:Invent. And most of it center on AWS working to demystify machine learning and open it up to a wider audience. Here are some of the highlights.

Sagemaker Canvas is a perfect example of how AWS is continuing to make machine learning even more accessible.

This visual tool gives people who are not data science experts the ability to get actionable insights using the AWS console. Users can bring their own data or leverage existing data services like S3. You will need to tell the service what you want to predict, but the service will try to automatically select the best algorithm for the use case.

But wait there’s more! We can easily shuffle all that work over to Sagemaker Studio and data science colleagues can then refine the model from there.

We also learned about an update to Sagemaker Studio Notebook which enables users to integrate EMR work into their SageMaker Notebooks. With this, we now have one place for all of the data prep analytics model training and optimization that we could ever want.

Speaking of model training, AWS covered in great detail how they are improving the training speed for some of the most complex models. A vital part of this is the Trainium chip. During the CEO keynote, AWS announced that the new Trn1 instances that use this chip are now available in preview.

Next, AWS realized that labeling data is a massive bottleneck for most of their customers so they announced Amazon SageMaker Ground Truth Plus . (It just rolls off the tongue.) This service connects companies with data-labeling professionals for a wide variety of data types.

Amazon also announced a preview of Serverless Inference , which offloads all the heavy lifting of managing the infrastructure for inference and remembering to scale down when your resources aren’t being used anymore. This option is available when creating a new SageMaker Inference endpoint in supported regions.

Finally, AWS announced a free—yes, “free” as in “vendor swag at a tech conference”—way to learn machine learning on AWS with Sagemaker Studio Lab . This service gives users a set amount of storage and compute, and you only need an email address to get started. You can also migrate your work into an AWS account when you’re ready to take things to the next level.

There’s a great deal of developer and infrastructure-related news to announce, but we’ll start with the biggest.

The biggest bit of developer news out of re:Invent 2021 was AWS Amplify Studio . This new low-code approach to building web and mobile applications provides a visual app creation environment for react. Some people have said that this is kind of like Visual Basic for web apps.

One of the things you’d expect about this is that it makes it easy to integrate with services that Amplify supports—and you’d be correct. But one of the things you might not expect is that this also integrates with Figma, one of the most popular tools designers are using to create these sorts of applications these days.

For more information on how AWS Amplify Studio works to help developers and designers create both front-end and back-end of web and mobile applications, check out the AWS blog announcement post here .

We also saw the new version of the AWS Cloud Development Kit—AWS CDK v2 —become generally available. This is an update over what Amazon.com Werner Vogels announced in his keynote where he said that it was in preview, but it’s actually generally available.

Also, for you CDK enthusiasts, there is now the CDK Construct Hub, which makes it even easier for you to find available CDK constructs that you can integrate into your CDK stacks.

CloudWatch also had a few exciting announcements this week. The first is Real-User Monitoring (or RUM). This feature measures your users’ experience by having a snippet of JavaScript that you include in your web applications. This then uploads performance and behavioral data straight into CloudWatch for you to analyze there.

Also, CloudWatch Evidently was announced, enabling you to handle both A/B tests and feature flags for your applications.

Next, AWS announced in preview the next generation of their Arm chip with Graviton3 . According to AWS, Graviton3 will deliver up to 25% more compute performance and up to twice as much floating point and cryptographic performance. You can start taking advantage of this today with the C7g instances in supported regions.

Finally, call all your cloud colleagues together to mourn the death of the AWS Forums. (And by mourning, I mean celebrate, because I’m not sure anyone is too sad to see those go.) Especially because we now get AWS re:Post, which is a Stack Overflow type experience managed by AWS and provided as part of their AWS Free tier.

One other critical area in the cloud that AWS has now made a focus is sustainability. We saw Google and Microsoft both make this a focus in the cloud this year, and AWS made it clear that they’re going to as well with two announcements at re:Invent.

First up, the AWS Carbon Footprint Tool is coming soon and will let organizations track their current carbon footprint and predict the future footprint based on their existing workloads. Second, AWS announced the addition of a new Sustainability Pillar to the AWS Well-Architected Framework . This is the first addition to the pillars since they were released in 2015.

That’s all from AWS re:Invent 2021. Keep up with Cloud Tracker on YouTube for the latest updates, news, and resources you need to keep up to speed in the fast-moving world of the cloud.

David is a Webby Award winning cloud development consultant that focuses on cloud native web, mobile, and IoT applications. For over fifteen years as a consultant David has led custom software development on emerging platforms for companies such as FedEx, AT&T, Sony Music, Intel, Comcast, Herman Miller, Principal Financial, and Adobe (as well as many others). David regularly writes and speaks on the digital landscape with published works for O’Reilly and Lynda.com. He has written for Mashable, Smashing Magazine, and VentureBeat, and he has spoken at events like AdTech, Interop, and Adobe Max.